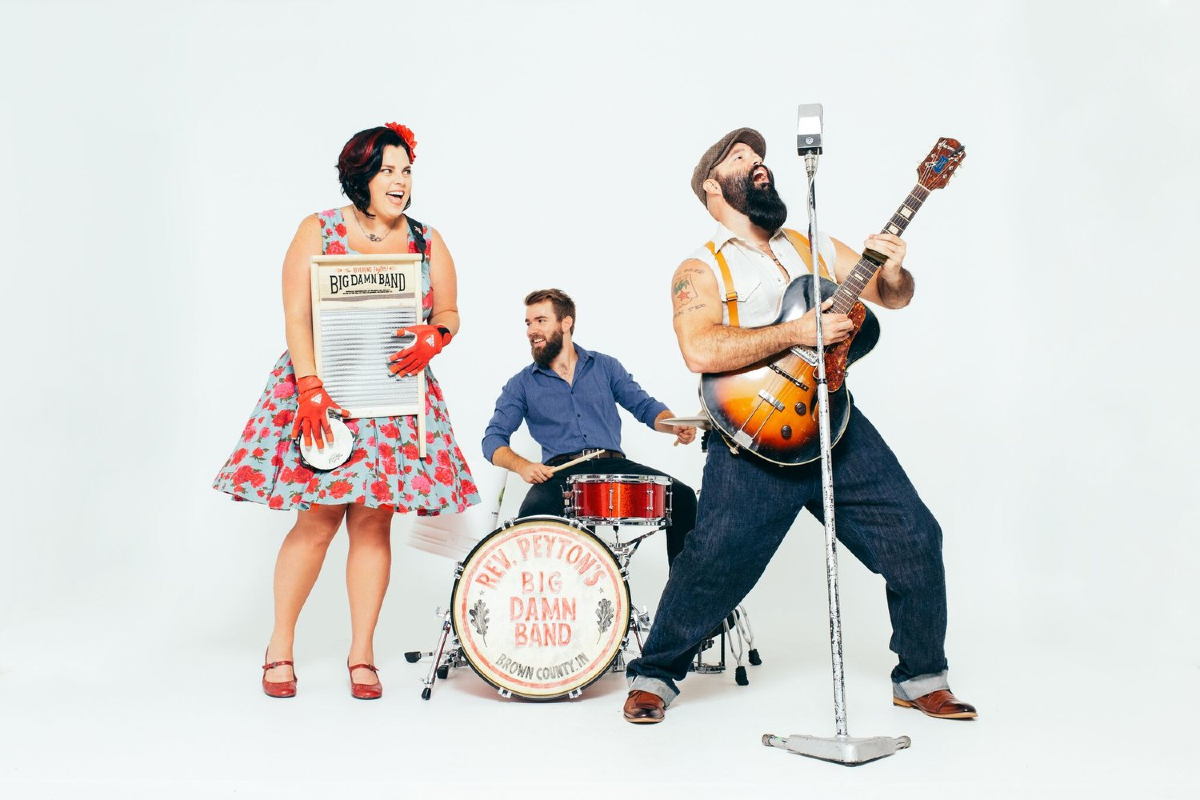 The new album from Reverend Peyton’s Big Damn Band was written by candlelight and then recorded using the best technology available in the 1950s.

But listeners won’t find another album as relevant, electrifying, and timely as “Dance Songs for Hard Times.”

Scheduled for independent release April 9, 2021, via Thirty Tigers, “Dance Songs for Hard Times” conveys the hopes and fears of pandemic living. Current BMA nominee, Rev. Peyton, the Big Damn Band’s vocalist and world-class fingerstyle guitarist, details bleak financial challenges on the songs “Ways and Means” and “Dirty Hustlin’.” He pines for in-person reunions with loved ones on “No Tellin’ When,” and he pleads for celestial relief on the album-closing “Come Down Angels.”
Far from a depressing listen, “Dance Songs” lives up to its name by delivering action-packed riffs and rhythms across 11 songs. The country blues trio that won over crowds on more than one Warped Tour knows how to make an audience move.

“I like songs that sound happy but are actually very sad,” Peyton says. “I don’t know why it is, but I just do.”

Of course, the greatest front-porch blues band in the world found itself sidelined from a relentless touring schedule because of the coronavirus pandemic. Peyton says he was surprised when his mind and soul unleashed a batch of new songs in March and April of 2020.

“I think it was the stress of everything,” he says. “At the time, we were watching everything we know crash down. I didn’t know what was going to happen with our career, with our house, with food, with anything.”

Peyton wasn’t alone in uncertainty. It’s a feeling that gripped the world. Added to Peyton’s concerns was a lingering illness – perhaps undiagnosed COVID-19 – affecting “Washboard” Breezy Peyton, his wife and Big Damn Band member, as well as a cancer diagnosis for his father. A metaphorical wallop arrived when unpredictable weather in the rustic wilds of Southern Indiana knocked out power at the Peytons’ 150-year-old log cabin. For multiple days.

While Breezy rested and recovered, Peyton crafted songs in near darkness.

“It’s been a struggle the entire time,” he says. “Nothing’s been easy. Other than the music. The music came easy.”

“Too Cool to Dance” might be interpreted as the album’s centerpiece for its message of not taking things for granted. The seize-the-moment anthem offers the chorus, “We may not get another chance. Oh, please don’t tell me you’re too cool to dance.”

“I was thinking about all the times where I’ve been somewhere and felt too cool to dance,” Peyton says. “I didn’t want to be that way. Not being able to do anything last year, I had this feeling of, ‘Man, I’m not going to waste any moment like this in my life – ever.’ ”